The use of the mace as a metaphor for authority, learning and scholarship, and eternal values is one of the grandest traditions in the history of higher education. The mace is always present during academic ceremonies and symbolizes the sovereignty of the college or university.

The Cedar Crest College Mace was commissioned as the senior gift of the class of ’73 to honor the faculty. Joel Bagnal, the Faculty Sponsor of the Class of 1973 and Professor of Art, created the mace in silver and rosewood and contributed the more than 300 hours of bench work required. Mr. Bagnal, who is present at today’s Installation Ceremony, writes:

My first extra curricular faculty assignment was to be the Faculty Sponsor of the Senior Class of 1973. Ever the person to look for the synergies, it was actually my suggestion that if the class would buy the materials, I would contribute the labor for an academic mace as the Class Gift. The synergy was that it gave me the opportunity and impetus to create a “Master Piece”, in the medieval sense of making a guild-worthy piece that would show my mastery of my craft – what better subject than an academic artifact whose roots reach all the way back to medieval college tradition – and it would be a gift from the Senior Class that would integrate into the future history of the College.

For me, the shape and meaning of the design came out of my own previous work in fabrication and casting. Fabrication lends itself to architectural shapes and casting lends itself to very organic ones. I wanted the crown of the mace to be a conversation between those two techniques and an exploration of their contrast. Shape and form, asymmetry and symmetry.

Two previously unknown facts about the mace. First, it comes apart. After 36 years, I have passed that secret on. Second, there is one other historic link. The organic cast shapes in the base of the crown have ornate “stamped” impressions incorporated into their design, originally made in the wax models by impressing decorative pieces from a treasured collection of 18th and 19th century printers’ lead type fonts. The historic printers’ name for those decorative pieces is “Dingbat”. So the original meaning of a dingbat was that part of the book that was both decorative and beautiful, but absolutely meaningless. An irony that was appealing to me at the time. 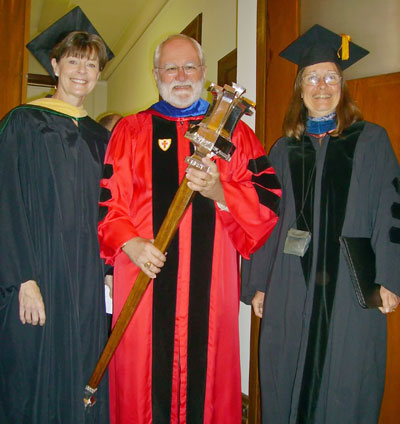 Joel Bagnal represents Boston University, from which he graduated in 1972, at the 2009 Cedar Crest College Presidential Inauguration of Carmen Twilly Ambar.

The history of the ceremonial academic mace can be traced back to the fourteenth century when it developed as a composite of two more ancient objects, the royal scepter and the battle mace. The kingly scepter dates back to Homeric times. Originally a simple staff (acquiring royal decorations only gradually), it was used by judges as the symbol of their authority to represent the king in dispensing justice and by heralds as a sign of their charge to deliver the king’s words. Citizens of Greek city-states who wished to address the civic assemblies received the staff from the city’s herald as a sign that they had the right to speak without interruption. This authoritative, heraldic function of the staff persisted through late antiquity and the early Middle Ages, when it became, as well, the natural symbol for the university’s authority to speak and to pass its authority to others. The mace was traditionally topped with a large ornament symbolic of the institution’s history and was carried by a member of the faculty in procession to assert this authority for the institution’s official actions.