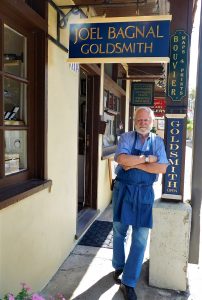 Joel Bagnal graduated from Stetson University with a major in art, where he first began his goldsmithing career in elective classes under Robert Ebendorf, a young metalsmithing instructor who had recently returned from a Fullbright Fellowship in Norway. Stetson was followed by a Masters of Education from Boston University and a Masters of Fine Arts in Metalsmithing from University of Georgia.

Over the next ten years, Joel established a metalsmithing curriculum at Cedar Crest College in Allentown, PA; was the charter metalsmithing faculty member in the founding of Boston University’s Program in Artisanry; received a National Endowment for the Arts individual craftsmen’s grant, and founded Joel Bagnal, Goldsmith, Inc. with custom design goldsmithing shops in Wellesley and Concord, MA. Society of North American Goldsmiths

Joel Bagnal Goldsmith opened for business in St. Augustine, on Aviles Street (the oldest European street in the Nation), in 2010.
“My great pleasure is the marking of special occasions with my clients. We brainstorm and sketch ideas that can only spark from the creative collaboration of craftsman and patron. And then I bring those visions into the reality of precious metals and gems. It doesn’t get much better than that.”